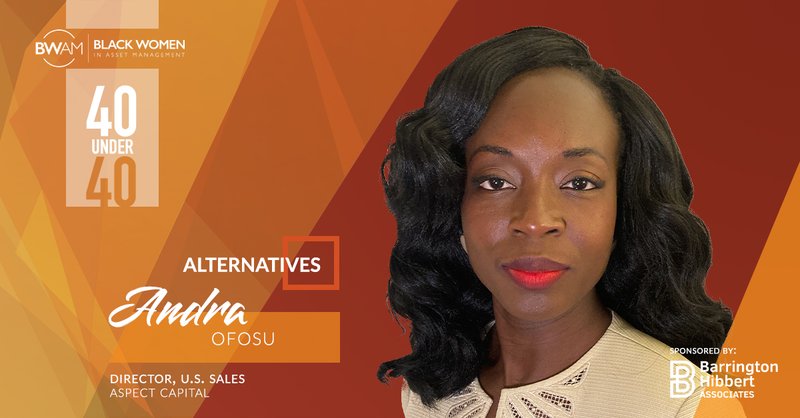 "I actually entered the hedge fund industry by chance! My first job was an internship at Lehman Brothers in London. I didn’t have much exposure to finance so rather than trying to find a niche, I wanted to learn as much as I could from anyone willing to teach me. I organically fell into asset-backed securitization, which, as the name suggests was very analytical! When Lehman fell apart a year later, I had a chance to reset my career – choosing something I felt better aligned with my personality. Still in London, I interviewed for a role at Credit Suisse in the prime brokerage division – a division which serves hedge funds. I’m currently a director in the US Sales team at Aspect Capital.

The hedge fund industry is by nature male-dominated, having been around since the 1950s and built around a certain infrastructure with embedded barriers to entry for women and underrepresented groups. It’s not until recently that gains have been made which have allowed women of colour greater access. For me, I did not want being one of a few black women in a mostly male space to be my central experience, which can bring about emotions such as feeling intimidated or apprehensive. Such emotions would impact my ability to show up as my best self.

I was raised by a single mother in Ghana. My mom worked as a government employee and used a disproportionate part of her income to pay for my education. I knew what a sacrifice it was; I felt it was my responsibility to not waste the things she’d done for me. My formative experiences growing up ingrained me with the ability to focus on my central goals and retain a sense of perspective, however hard things seem on the surface. My mom would always say: where there is a will, there is a way!"