Trend following led the way and may continue to do so

2022 will long be remembered for being a year of upheaval and change in economies and markets. But how did quantitative investment styles cope with these events? We summarise what did and didn’t work, using our growing collection of computer-driven models harnessing globally investable effects across multiple sectors (asset classes) and timeframes. They trade commonly-found liquid assets as well as harder-to-access assets such as European power contracts. They also use a range of techniques such as econometric and sentiment-based approaches.

As fate would have it, trend following, also known as (directional) momentum was by far the trendiest and best performing investment style last year. 2022 was a year of resurgence for CTAs, who typically make use of systematic trend following to harvest the momentum effect across a wide range of sectors. Inflation and inflation expectations became unanchored, and this phenomenon was both broad-based, globally widespread and exacerbated by an energy crisis stemming from the war in Ukraine. Central banks turned aggressively hawkish and recession fears grew substantially. Against this backdrop, bonds had one of their worst ever years, the US dollar had one of its best and stock markets tanked. The final quarter of the year saw reversals in some of these themes amid speculation that inflation had peaked, but the outlook remained gloomy.

We also look ahead and spell out why some themes may persist. It’s more likely that we’ll see a continuation than a reset in 2023, irrespective of whether rumblings of a policy pivot get louder.

(Up and green arrow = Long. Down and red arrow = Short)

Breaking down performance by lookback period (shown below in number of days), we see that trading momentum slowly generally outperformed, in particular in bonds and energies. Trend following in stock indices, agriculturals and metals may have benefited from increased speed, but whipsaws were prevalent making for tough terrain in these riskier sectors.

2. Market Backdrop and Popular Trades in 2022 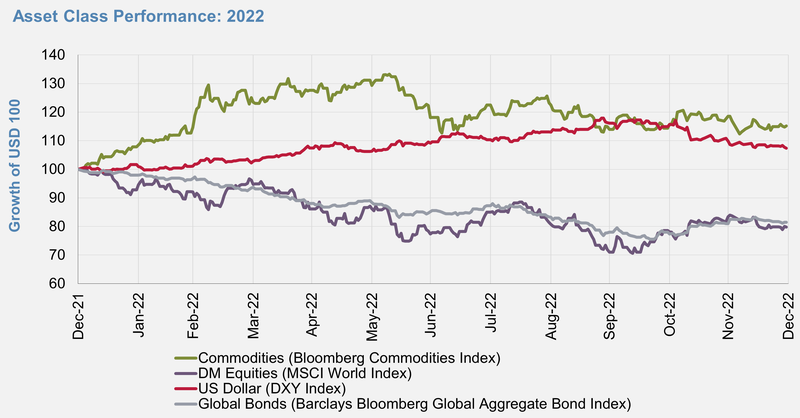 Source: Bloomberg. The data above with respect to various indices is shown for illustrative purposes only. Detailed descriptions of the indices used above are available from Aspect on request.

The chart above shows that there were clear strong trends in the major asset classes. However, it was not entirely smooth sailing, and some unwinds occurred. Bond volatility gradually rose towards historic extremes without much respite, and it increased a lot more than stock market volatility which also saw occasional upward bursts. Meanwhile, bond and stock markets appeared more closely correlated, challenging the diversification benefits sought in traditional long only 60/40 portfolios.

Below, we summarise some of the best performing consensus trades which endured for much of the year, though some of them reversed towards year-end. Notably, there have not been clear resolutions to many of their underlying drivers, so it would be reasonable to expect some more of the same in 2023. 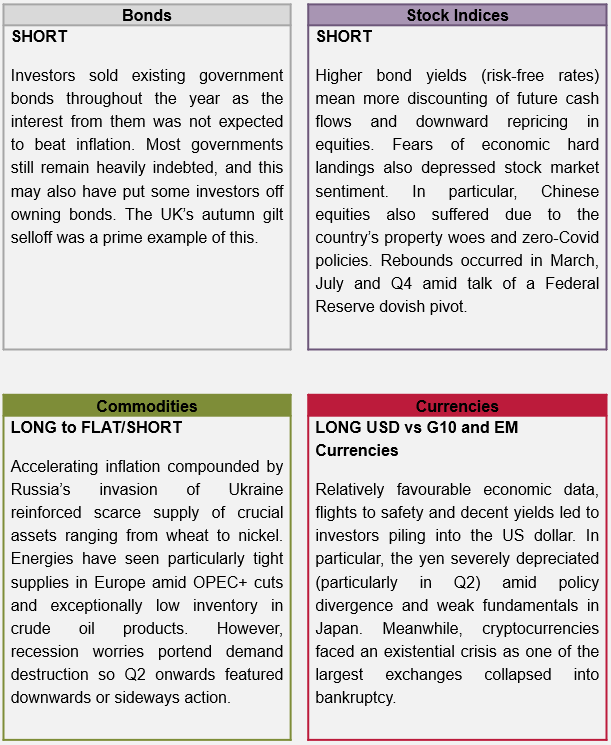 With diminishing returns in traditional asset classes, investors are increasingly seeking to reduce reliance on traditional long-only investments in favour of alternative investment themes such as the ones listed below. Each theme houses a set of models with common premises. Around 100 multi-asset models (almost all of which trade real client money as part of Aspect’s funds) were scaled to target the same volatility and their simulated 2022 positions and returns were analysed.

From the first performance heat map below, we can highlight a few observations:

Directional trading styles grabbed headlines, particularly in bonds, and this is exemplified in the second heat map above. Historic moves in energies and metals markets such as nickel propelled gains from directional models in those sectors. Cross-sectional models and those with a blend of directionality were performant in currencies.

Bonds drove significant risk and performance across portfolios of different styles. The US 10Y Note is a bellwether and arguably one of the most important markets so it was rather interesting to see how themes were positioned as the year went on. 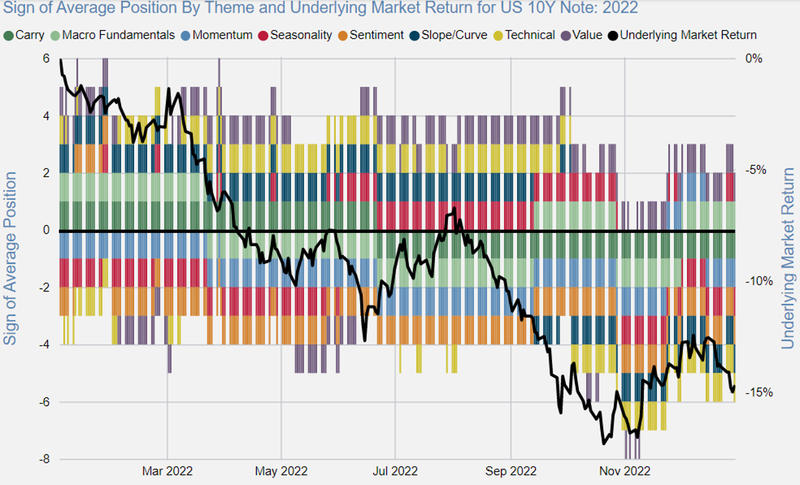 What happens next? Well, the inflation story is far from finished. Moreover, the UK and parts of Europe may well already be in recession and the US is most certainly not out of the woods. Wage growth is still yet to catch up with headline inflation prints across the globe. China’s ongoing lockdowns have possibly suppressed inflation throughout the world, but work is underway to rollout a stronger vaccine which could see their economy reopen early in 2023.

There is still excess cash in the economy that needs to be drained, budget deficits are still unsustainable and unemployment rates have room to rise. Authorities still need to continue quantitative tightening, maintain high interest rates, and even increase taxes. These necessities should reduce cash in the private sector but risk inducing recessions which reduce credit demand and capital expenditure. The impacts of monetary and fiscal tightening usually manifest with a lag so haven't yet been fully felt.

As a result, the growth engines that power stock indices look weak, and bonds can't compensate. Liquid alternatives merit serious consideration and trend following in particular has demonstrated that it can provide that much needed support to portfolios time and time again.

All sources are Aspect unless otherwise stated. Data as at end of December 2022.

Unlike the results shown in an actual performance record, these results do not represent actual trading and are backtested. Results are calculated through the application of the strategy on historical market data. Hypothetical performance has many inherent limitations. One of the limitations of such performance is that results are generally prepared with the benefit of hindsight. No representation is being made that any account will or is likely to achieve profits or losses similar to those shown. There are frequently significant differences between such performance and the actual results subsequently achieved by any particular trading programme. PAST PERFORMANCE IS NOT INDICATIVE OF FUTURE RESULTS.

All figures are gross and as such do not reflect the deduction of fees and expenses which would have lowered overall performance. They have not been audited and do not include the reinvestment of all sources of earnings.

Any opinions expressed are subject to change and should not be interpreted as investment advice or a recommendation. Any person making an investment in an Aspect Product must be able to bear the risks involved and should pay particular attention to the risk factors and conflicts of interests sections of each Aspect Product’s offering documents. No assurance can be given that any Aspect Product’s investment objective will be achieved.

To view our disclaimers relevant to this article, please click here.